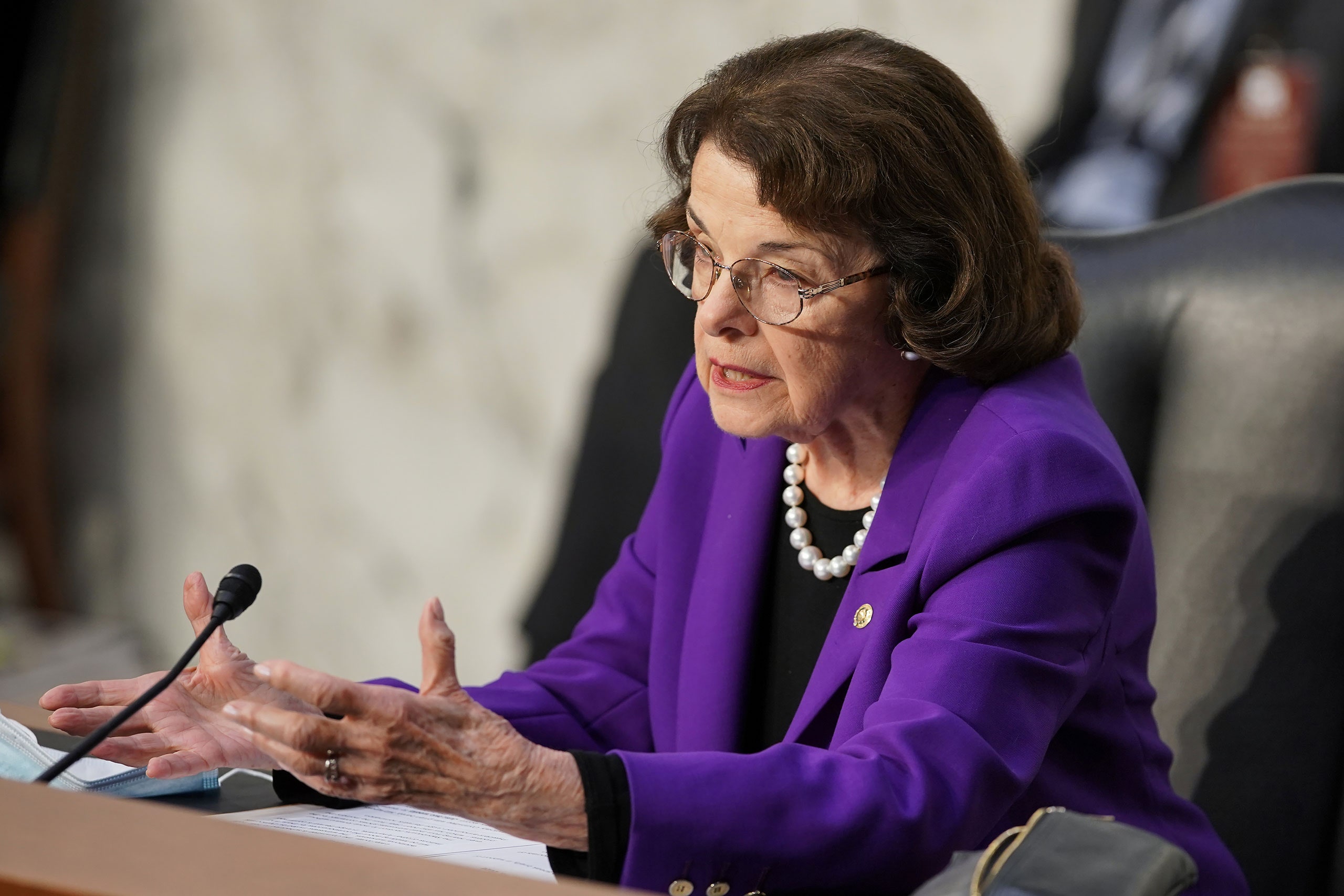 On May 31, 2011December 16, 2021
by stolarzrawling
in Repeal DOMA
Comments Off on CA Sen. Dianne Feinstein Talks About Her Effort to Repeal DOMA

This is cross-posted from my interview with Sen. Feinstein for Frontiers In LA magazine.

(Corrected) A book could be written about the complicated relationship between California Sen. Dianne Feinstein and the LGBT community. The conservative Democrat has alternatively sparred with and fought hard for gay people for over 30 years, starting as mayor of San Francisco in the late 1970s/early ‘80s. Best known nationally as the mayor President of the Board of Supervisors who announced the assassination of gay Supervisor Harvey Milk in 1978, at home she was at the center of a serious political dust-up over her opposition to the city’s proposed domestic partnership law in 1982, which she said “divided the community.”

Feinstein also angered many in 2004 by seeming to suggest that gays and San Francisco Mayor Gavin Newsom essentially cost Massachusetts Sen. John Kerry the presidential election against President George W. Bush because Newsom permitted the issuance of marriage licenses to same-sex couples. That decision led to the court case that resulted in a ruling by the California Supreme Court in May 2008 that same-sex couples have a fundamental right to marriage equality. Prop. 8, the anti-gay 2008 ballot initiative, sought to invalidate that ruling.

So no one expected Feinstein to become a heroine for marriage equality. But her first action sent up a flare. On Sept. 12, 2008, urged by Equality California and prodded by the Bay Area Reporter, Feinstein officially came out against Prop. 8.

“Proposition 8 would eliminate the right of same-sex couples to marry in California. I oppose it as a matter of equality and fairness,” Feinstein said in a statement. “The right to marry is fundamental. It provides social stability, economic equality and the ability to make decisions for a spouse in a time of crisis.”

But almost as if speaking of her own evolution, Feinstein added, “The views of Californians on this issue have changed over time, and as a state, I believe we should uphold the ability of our friends, neighbors and co-workers who are gay and lesbian to enter into the contract of marriage.”

Feinstein didn’t stop with a statement. She worked with the No on Prop. 8 campaign to produce one of the most effective TV campaign ads, featuring her personal plea to voters to oppose Prop 8. The voters passed Prop. 8 anyway in November 2008.

The reaction to her extraordinary measures was barely constrained worship when she gave the keynote address at the Human Rights Campaign in Los Angeles in March 2009. Nevermind that Feinstein is considered one of the most powerful members of the U.S. Senate as Chair of the Select Committee on Intelligence and a respected member of the judiciary and appropriations committees. All anyone could see was the woman who stood up for the rights of LGBT people to enjoy liberty and the pursuit of happiness, just like heterosexual Americans.

During her keynote, Feinstein said her “heart sank” when she heard that Prop. 8 passed, but noted that “a great deal

of money had been spent to distort marriage equality and cast these equal rights as something dangerous to children and to all marriages.”

Feinstein then added, “I can’t tell you when or how. It may take another year, or five. It may take another ballot initiative. But I firmly believe that equal marriage rights will one day be the law in the state of California. I hope that day comes soon, and I believe it will. … Until this question is settled, it’s up to you to continue to press the case, united, as you march forward in dignity. We cannot simply put our faith in a positive outcome. We must hope for the best, but prepare for the worst. … You have come a long way, but the journey is not finished. We must persevere until the day when acceptance triumphs over prejudice. I will support you in this quest. And it will happen.”

Another surprise came this past March 16 when Feinstein, the politician who opposed domestic partnerships 29 years ago, introduced “The Respect for Marriage Act,” a bill designed to repeal the Defense of Marriage Act. Though she had voted against DOMA in 1996, no one expected Feinstein to take a lead on such a controversial issue. A similar bill was introduced in the House by very liberal Rep. Jerry Nadler of New York.

“There are tens of thousands of legally married same-sex couples in the United States, and more than 18,000 in my home state of California alone,” Feinstein said at a news conference. “These couples live their lives like all married people; they share the bills, they raise children together and they care for each other in good times and bad, in sickness and in health, until death do they part. But because of DOMA, they have been denied federal protections. It is time to right this wrong. This bill will ensure that all married couples in the United States enjoy equal protection of our laws.”

During a 12-minute phone interview on May 26, Frontiers asked Feinstein about the status of the DOMA repeal bill.

“It’s in the Judiciary Committee. We hope to have a hearing before long. We’re working with the community on securing votes. We have 24 co-sponsors now and I’d like to get as many as possible, which strengthens the possibilities for passage,” Feinstein said. “The Courage Campaign is reaching out. They have organized campaigns of phoning in several states, as I understand it. I’m not making phone calls.”

Given the opportunity to speak directly to people about DOMA, Feinstein said she would tell them, “Issues of family and marriage are virtually all done by state law, not federal law. The Defense of Marriage Act, known as DOMA, essentially said, OK, even if a state says you can go ahead with a same-sex marriage, those individuals cannot have any of the federal benefits. And the list of federal benefits [include] joint federal income taxes, certain deductions, spousal benefits under Social Security, unpaid leave under the Family and Medical Leave Act if a loved one falls ill and the protections of the estate tax when one spouse passes and wants to leave his or her possessions to another. Those are federal laws that are essentially cancelled under DOMA.

“So if you strike DOMA,” she continued, “these basic rights come back to individuals whose states have passed laws legalizing same-sex marriage. I think people have to know that. We’re not giving anybody anything special that any other married couple doesn’t get. But what we are doing is taking out a prohibition.”

Frontiers noted that binational couples are closely monitoring the DOMA repeal, since in many cases that right is

what keeps straight binational couples together and orders the deportation of gays. Frontiers told Feinstein about the deportation hearing that Doug and Alex, who live in Cathedral City, are facing on July 13. Frontiers asked if Feinstein might be willing to advocate for suspending or halting deportations while the DOMA repeal bill—which Feinstein and the Obama administration agree is unconstitutional—makes its way through Congress.

“I’ve never been asked that question before. I very much doubt it because it’s a whole different set of laws, and there I would be accused of really giving preference because—let’s say there was somebody in a straight marriage that was where the gay couple are—and the same thing would apply to them. They would be deported, regardless of the marriage. I really think it’s a bit of apples and oranges,” Feinstein said.

Frontiers pressed a bit, trying to explain that for gay binational couples, the issue was precisely one of inequality because of DOMA. But Feinstein seemed to link the DOMA issue with the larger battle over immigration reform.

“There are straight binational couples, too. And one could be eligible for deportation,” she said. “I don’t know what the circumstances would be, but it’s certainly possible. I don’t want to argue with you here. I didn’t know you were going to ask this question. I’m happy to take a look at it. I have my hands very full with where we are now, and if we get just this bill through, it’s an enormous victory. And I’m not eager to complicate the situation.”

On Prop. 8, Feinstein said that “at this stage,” she has no opinion on whether the LGBT community should return to the ballot in 2012 to repeal Prop 8.

“No one’s presented that to me as an option. I think it has to be carefully evaluated and looked at. I have no doubt that as time goes on, people’s views are changing,” Feinstein said, adding “I think the situation is moving in a very positive direction.”

Frontiers spoke with Courage Campaign founder Rick Jacobs, who talked about his meeting with Feinstein—another surprise since the Courage Campaign has disagreed with the senator on a number of progressive issues. “She looked me in the eye and said, ‘I want to repeal DOMA,’ and I believe her,” Jacobs said. The two shook hands on a partnership where Courage is using all its resources and intellect to help Feinstein get more co-sponsors and get to the 60 votes needed in the Senate to pass the DOMA repeal bill. Jacobs said they now have 77 volunteers in 43 states working with local organizers. And their aggressive Facebook campaign continues to move senators who are overwhelmed with Facebook messages from constituents. (See their Facebook campaign here.)

“We are at a time in our history when equality is within reach for binational couples,” Soloway said, noting the “unprecedented efforts underway in Congress, led by Rep. Mike Honda, Rep. Jerrold Nadler, Senator Patrick Leahy

and Senator Feinstein.” But action is needed now.

“The growing call for a moratorium on deportations that are tearing married same-sex binational coules apart every day in this country is not solely, or even primarily, an immigration issue, but rather an equality issue. No other civil rights issue of our time intersects with our broken immigration system in this manner,” Soloway told Frontiers, noting that the administration has the power to stop supporting the law it has declared unconstitutional by using prosecutorial discretion and prioritizing law enforcement resources to deport criminals but preserve family unity.

“Our greatest allies have stood up in the Senate, the House and at 1600 Pennsylvania Avenue to declare that an end must come to the destructive law known as DOMA,” said Soloway. “In the meantime, those words must be followed by actions. To stand by and allow families to be torn apart and marriages destroyed suggests a gap in leadership on this issue. A rhetorical position in support of LGBT families must be backed by actions, which would truly make a difference. That is the moral and responsible response to the crisis created by DOMA deportations.”

Feinstein told Frontiers that she would “look into” the binational issue. But as her work with the Courage Campaign illustrates, Feinstein wants and needs the support of the LGBT community to pass the DOMA repeal bill and help secure full equality for same-sex couples.