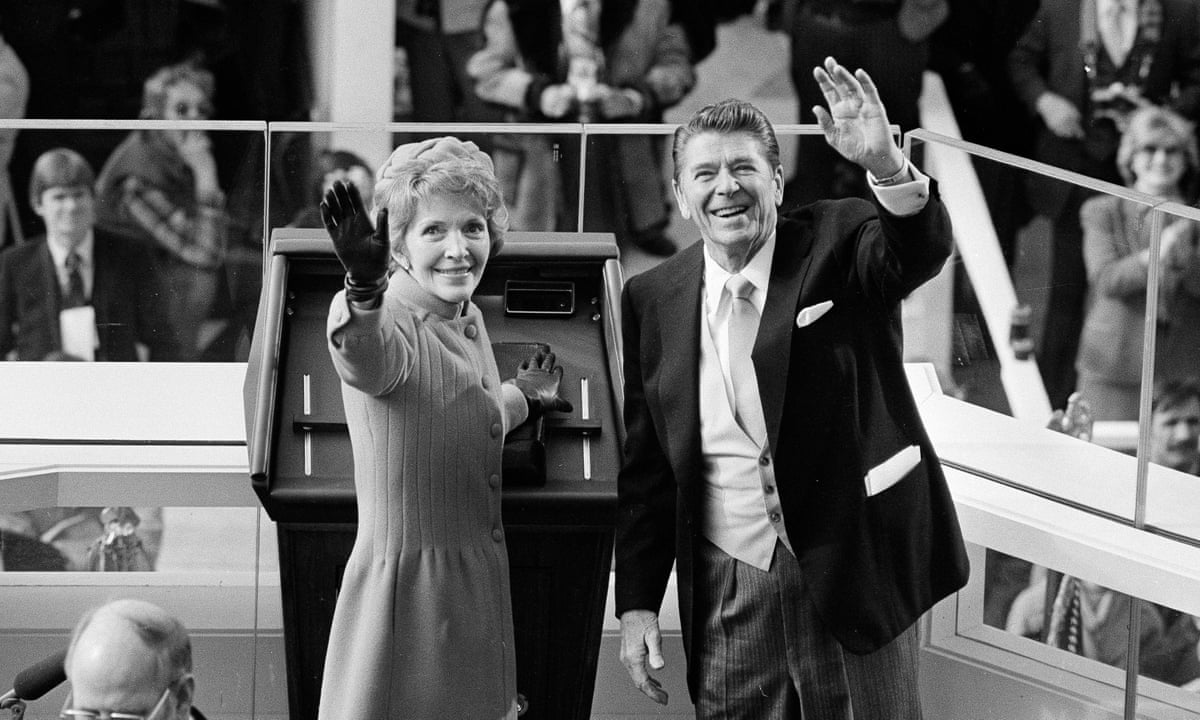 On February 6, 2011December 16, 2021
by stolarzrawling
in Life Style, Real Legacy
Comments Off on Ronald Reagan’s Real Legacy: Death, Heartache and Silence Over AIDS

America is gushing Sunday over former President Ronald Reagan in recognition of what would have been his 100th birthday. Produced by Reagan groupies, the long-weekend celebrations at the newly primped Reagan Library and Museum in Simi Valley are glitzy and reverent evocations of an imagined man.

In this white-washed version of history, Reagan, not Soviet Prime Minister Mikhail Gorbachev (remember “glasnost,”  “perestroika,” and the impact of Levis, Coke and “Dynasty”?) is credited with “tearing down” the Berlin Wall; the trillion dollars in debt Reagan wracked up during his “conservative” presidency is ignored;  “supply-side” or “trickle-down” economics” still works, even though theory-originator David Stockman says it doesn’t; the Reagan-approved secret Iran-Contra scandal was patriotic, not subversive; and he is still the “Great Communicator” – who conned working-class “Reagan Democrats” while catering to the rich, creating a huge surge in homelessness, reveling in unchecked deregulation and extolling union-busting with the mass firing of the over-worked, striking PATCO flight controllers – even before there were trained replacements.

After the depraved Vietnam War, the perennial dark and disgraced Richard Nixon, the short-term Gerry Ford and the confusing Jimmy Carter (who orchestrated the Middle East Peace talks but couldn’t free the Iran hostages or prevent long gas lines) – Reagan, the “ah-shucks” bad B-movie actor (Bedtime for Bonzo), huckstered his scripted “vision” of “Morning in America” viewed from some exceptional shiny city on the hill. Reagan was the imaged Mount Rushmore president, the right wing conservatives’ longed-for King Arthur who would crush the Democratic Dream of FDR and the Kennedys and anyone who believed in social and economic justice promised by the “counter-culture”1960s. He’d already proven his anti-Communist bona fides appearing in 1947 as a friendly witness before the House Un-American Activities Committee.

For LGBT people, Ronald Reagan’s presidency was the far different “mourning in America.” And unlike Nixon who was forced to resign for covering up the political Watergate scandal, Reagan didn’t even bother covering up his cold disdain, his deliberate neglect, his abject refusal to help gay men stricken in 1981 by a strange new communicable disease that turned out to be AIDS. But there was no “AIDSgate” for Reagan; the White House agreed with the Religious Right that gays deserved what they got – they deserved to die.

”[In 1986] President Reagan asked the surgeon general to prepare a report on AIDS as the United States confirmed its ten-thousandth case. Leaders of the evangelical movement did not want Koop to write the report, nor did senior White House staffers who shared Koop’s evangelical convictions. As Dr. Koop related to me, “Gary Bauer [Reagan’s chief advisor on domestic policy] … was my nemesis in Washington because he kept me from the president. He kept me from the cabinet and he set up a wall of enmity between me and most of the people that surrounded Reagan because he believed that anybody who had AIDS ought to die with it. That was God’s punishment for them.”

In his extraordinary book And The Band Played On about the early history of the AIDS epidemic, gay journalist Randy Shilts, who later died of AIDS, wrote that two events dramatically changed the course of AIDS in America. The first was the announcement that closeted gay movie star Rock Hudson had AIDS and the second was the report by Koop.

In an interview with me for the 25 anniversary of the June 5, 1981 CDC report of six gay men with what turned out

to be AIDS, Hudson’s publicist Dale Olson said Reagan called his longtime friend in July 1985 when Hudson was in a Paris hospital desperately looking for a cure for AIDS. Nonetheless, the “Great Communicator” remained silent. It’s not as if Reagan was unaware of AIDS by then: on April 23, 1984, the CDC had reported 4,177 case and 1,807 deaths – something that came to the attention of the National Democratic Convention when a candlelight vigil of more than 100,000 people marched from the Castro to Moscone Center.

California Rep. Henry Waxman, who held the first congressional hearing on the disease at the Gay and Lesbian Community Services Center in Los Angeles in 1983, wrote Washington Post in late 1985:

“It is surprising that the president could remain silent as 6,000 Americans died, that he could fail to acknowledge the epidemic’s existence. Perhaps his staff felt he had to, since many of his New Right supporters have raised money by campaigning against homosexuals.”

Reagan finally mentioned the word “AIDS” in October 1986 and was virtually forced to deliver his first major speech on AIDS on May 31, 1987 on the eve of the Third International Conference on AIDS in Washington. He was the invited by Elizabeth Taylor to speak at a fundraiser for the American Foundation for AIDS Research, which Hudson helped start with a $250,000 grant given to Taylor. (Here’s a link to Reagan’s entire speech.) Outside the tented-event were protesters and yet another candlelight vigil.

“Reagan’s program, of course, would do very little to actually stop the spread of AIDS. Though testing heterosexuals at marriage license bureaus created the illusion of action, very few of thse people were infected with the virus and very few lives would be saved. But then saving lives had never been a priority of the Reagan administration. Reagan’s speech was not meant to serve the public health; it was a political solution to a political problem. The words created a stance that was politically comfortable for the president and his adherents; it was also a stance that killed people. Already, some said that Ronald Reagan would be remembered in history books for one thing beyond all else: He was the man who had let AIDS rage through America, the leader of the government that when challenged to action had placed politics above the health of the American people.”

And not once did Ronald Reagan utter the word “gay.”

“By the time President Reagan had delivered his first speech on the epidemic, of Acquired Immune Deficiency Syndrome, 36,058 Americans had been diagnosed with the disease; 20, 849 had died.”

“In 2009, 33.3 million people around the world were living with HIV/AIDS. More than 60 million people have been infected with HIV since the pandemic began. AIDS is the leading cause of death in Sub-Saharan Africa, and the fourth leading cause of death globally…..Almost 5,000 people die every day due to AIDS. AIDS caused 1.8 million deaths in 2009. An estimated 25 million people have died from HIV-related causes since the beginning of the pandemic….There were 2.6 million new HIV infections in 2009, or almost 7,200 people per day.”

The terrible irony for LGBT people is that in the very beginning of the epidemic there was hope that Ronald Reagan would DO something. There was precedent for the government acting quickly to stem a public health crisis. In 1976, just five years earlier, the government rushed to stop an outbreak of Legionnaires disease at an American Legion convention in Philadelphia.

(Corrected) And perhaps even more importantly, in 1978, as former governor of California, Reagan publicly opposed the Briggs Initiative – the antigay measure proposed by associates of Rev. Jerry Falwell and Anita Bryant. Opposition by the hugely popular governor helped significantly in the measure’s defeat. As a result, Reagan received gay support in his presidential bid against Jimmy Carter in 1980, as well as the more effective Religious Right.

But once in office, Reagan turned his back on the gay friends and staff he and his wife Nancy had known for years.

Most historians and political pundits will look at the ripple effect Reagan’s two terms in office – from 1981-1989 – continues to have on American politics. But for many LGBTs, myself included, I cannot hear the man’s name without thinking of so many other names now effectively wiped from the collective memory – names like Michael Callen and Paul Monette and Connie Norman and Wayne Karr. So many names – and with each name, memories of joy and rage and a kind of spirituality in confronting death with dignity – in spite of the government’s disgusting deliberate neglect.

Former President Ronald Reagan died on June 5, 2004 – 23 years to the day when the CDC’s first report on AIDS appeared. Reagan had apparently been living in seclusion with Alzheimer’s Disease — the progressive disease that causes loss of memory and mental abilities. People gushed for a week remembering the “Great Communicator” who was entombed at his grand presidential library and museum like a political Elvis: Simi Valley as the political Graceland. There his groupies gather again, while those of us who remember his legacy of horror, neglect and death still struggle with an un-ending heartbreak of what might have been had our government cared and our friends not died.

In Last Watch of the Night, my friend Paul Monette wrote in an essay about the 25h anniversary of Stonewall:

“[A] Victor, my last best friend, is wont to observe: ‘They don’t understand. I don’t just want a cure. I want a cure and all my friends back.’….As for my own losses, the pile of bodies is harly countable anymore except in the heart – because the dead outnumber the living now. Personally, that is…..

Meanwhile, let the Stonewall celebrants save me a piece of cake from the party, a rainbow flag and a rousing chorus of ‘We shall overcome.’ Understand that I am far too busy tracking the enemy within. But I’m with you. Brother and sister, and will be always, even after I’m carried from the battle and planted on the final hill. You must never forget: There’s no turning us back now. No more closets and nor more loveless years in solitary. From now on, we have each other. Freedom is on our side.

And there is no America without us.”